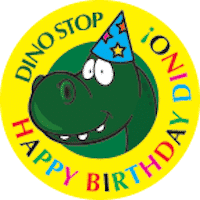 August is birthday month for the babies at Dino Stop convenience stores and gas stations throughout northeastern Wisconsin – baby dinosaurs, that is.

The seven Dino Stop locations in the region are celebrating the first birthday of their iconic fiberglass dinosaur babies during the month of August with contests and prizes that range from free fountain drinks to a year of free gas. No purchase is required to participate in the promotions.

“The dinosaurs are well-known in our area as a symbol of our brand,” said Tony Wied, president of Wied Oil, the company behind the Dino Stops. “We added the seven baby dinosaurs last year to the existing ‘mother’ dinosaur at our Green Bay location as a fun way to increase brand awareness for customers throughout the region.”

The birthday promotion features a Dino birthday sticker hidden somewhere in each of the Dino Stop locations. Customers who find the sticker are asked to take a selfie with the sticker, post it to at least one of their social media accounts and show the proof to the cashier.

Successful participants will earn an instant prize as well as be entered into a drawing for larger prizes at the end of the month, including a year of free gas. The birthday celebration also features a special birthday Rice Krispies treat available for 99 cents.

Wied Oil was founded by Wied’s parents, Jerry and Chris Wied, and his uncle, Steve Wied in the mid-1980s and today employs 90 team members. The company purchased the Green Bay location, located on the corner of South Ashland Avenue and Lombardi Avenue in 1992. The station’s dinosaur became a recognizable roadside symbol that was as much a geographic reference point as it was a corporate brand.

Something Old Meets Something New at Expera Specialty Solutions, LLC